Whatever the year level, whatever the school, there was always a number line across a wall in my classroom. In younger years it was zero to ten or zero to twenty or in older classes we would add decimals to tenths or hundredths and equivalent fractions as well as negative numbers.

Recently, I have been tutoring with my niece Miss Ten. She is not doing too well at school having been at three schools in five years due to moving, my sister asked me to do some numeracy testing to see what was ‘going on’ with her. As it turns out, there were a few gaps in her learning.

She could add with regrouping, subtract with renaming to hundreds but still used her fingers to add 5 and 9. She could complete multiplication tables like 5x5 and could rote count by 2s, 3s, 4s and 5s but couldn’t complete a pattern like 3,7,11, 15 (count by 4 start at 3). She understood simple decimals like 1.5 and 2.7 and could order them but couldn’t put them on a number line. When I asked her what it was she said she’d seen a number line but had NEVER used one. 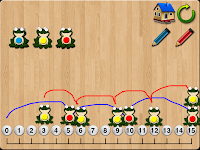 Having most recently been in the Junior Primary classes I took her right back to the beginning just to see what it was she ‘got’ and didn’t ‘get’. She loves using the iPad and has an iTouch of her own.  Little Monkey Apps Number Lines was created for Miss Ten. 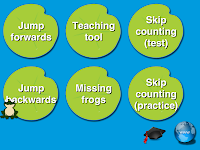 Its free! So try it out.
Posted by Littlemonkeyapps at Wednesday, May 23, 2012