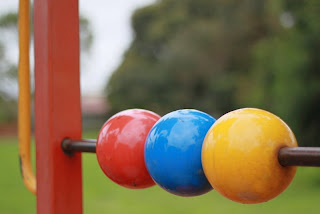 Our two year old, Little Angel has started “counting” to ten.  It isn’t “real” counting, more reciting of number names in more or less the right order. We aren’t pushing it or even overly encouraging her, she just recites when she sees numbers (or letters) or picks up objects and starts counting. She recently surprised us by saying eleven, twelve. But a new skill has emerged… counting by 2s. “Two, four, sic (six) eigh (t), ten.” We had no idea where she picked this up… but they are little sponges, so we had a hard think and watched ourselves carefully.

We asked at Childcare (she attends twice a week) and their response was that they use a play based curriculum and they don’t teach children to count at this age.  (I wonder if they’ve been reading any books with numbers or counting objects, setting the table with spoons and cups? and if my child is play counting then shouldn't they then include this in their planning?)

Then we went to visit Grandma...
·           When nappy changing, Grandma counts with Little Angel, taking it in turns to say a number.
·           At Grandma’s she watches Thomas the Tank Engine (boy cousins) on TV and guess what …in the intro song they count by 2s!

But could this be enough to make her count by 2s?

We don’t have the type of child to sit and be “taught” (and what two year old sits and listens) We can’t do a three part lesson, Montessori fails us in that regard. So we’ve put out around the house IKEA side tables and a number of “Toys”. An empty shoe box and a bucket of dinosaurs, an egg carton (cut off to be a ten frame for one of my tutoring students) filled with pom poms and a set of tongs, Paper and stackable PLAYON crayons, translucent beads on the Light Table with plastic cups, coloured icypole sticks and playdough and laminated cardboard shapes – all triangles. (Taken from a Year Three teacher-made board game)

Little Angel won’t learn to count overnight and we’re not expecting her to. We’re not encouraging the counting by 2s though, we’ll keep counting by 1s! It is our job and parents and her primary educators to give her every opportunity to explore and PLAY with her new found skills and if the icypole sticks end up making a pretty hedgehog or birthday cake with candles, then so be it!

For some useful reading and teacher jargon check out:
http://www.eyeoneducation.com/bookstore/client/client_pages/samplechapters/7108-9.pdf

Like all mothers I plan, I organize, but since ceasing my classroom duties, I find that my creative flair has been somewhat stifled! For Little Angel's first birthday, we went straight for my favourite picture story book, The Hungry Caterpillar. For her second birthday, I thought Ladybirds (or Lady bugs depending on where you live!) As I started to Google cake ideas, decoration ideas I remembered making ladybirds to demonstrate halves and doubles with my junior classes. I found a Black Line Master hidden in my rarely touched filing cabinet, rejigged it to make it easier to cut out, and found some sticky black dots (my Aunty worked at a label factory so I had heaps!)

As I was making these Ladybirds I thought that I’d keep them for when Little Angel is ready for one to one counting and subitizing work. My DH (& Little Monkey Apps programmer) thought I was mad for making the decorations until I explained what I was going to use them for later on… 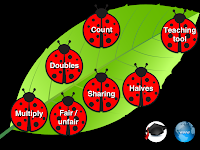 To cut a long story short, that is how Ladybird Maths began.
Like our other Apps, the initial idea always stems from something I found valuable in the classroom. When we flesh out ideas we end up with several activities that are springboards into other areas. The ‘teaching module’ always comes first in my planning, then the activities. 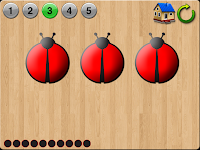 I know I harp on about this but remember that Apps are only ONE way of presenting material. Use blocks, counters, real life experiences followed up by iPad work and written work (yes in some schools this is a dirty word but for heavens sake!)